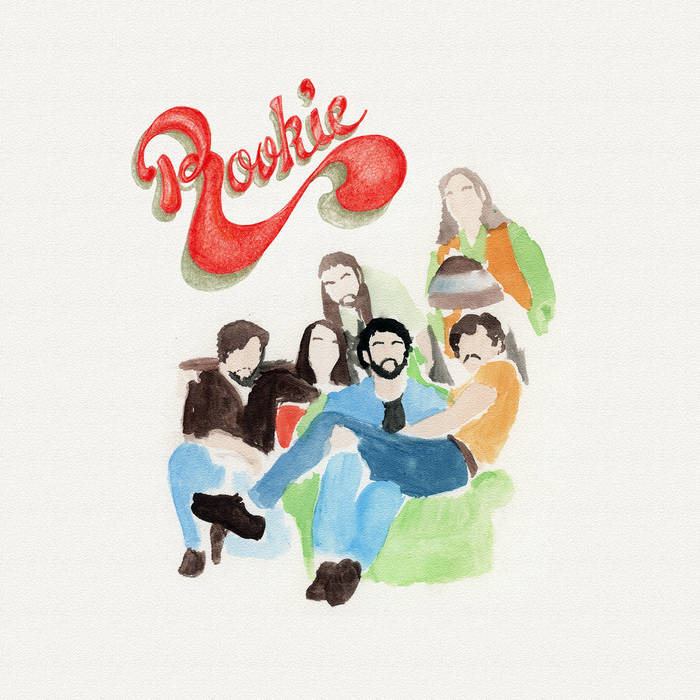 Bucky As much classic rock as it is alt country. Smooth and catchy with clever song smithing through and through. I wouldn’t expect anything less for a band on the Bloodshot Records roster.

ROOKIE is six matching jumpsuit-clad, shaggy-haired friends from Chicago who play rock ‘n’ roll that’s more at home next to their parents’ battered LPs than on their friends’ streaming playlists. Their self-titled, debut full-length album deftly reformats the classic rock landscape with blowtorch hooks, enthralling harmonies, evocative touches of cosmic country, and distinctively indie-minded songwriting.
ROOKIE’s modern take on timeless American rock ‘n’ roll pulls from all corners of the sonic map, it’s familiar but fresh, lived-in but blown-out. It’s the ’70s/’80s pop-rock sheen of Cheap Trick, 3-minute precision songwriting of Big Star, loose Neil Young Americana, and hazey, psych-flavored boogie of the Allman Brothers and Thin Lizzy. Though barely able to comfortably fit on most stages, once they’re plugged in and smooshed together it’s a potent blend of power chords, blistering leads, and performance prowess beyond their years.
Like local peers Twin Peaks, Whitney, and Post Animal, ROOKIE emerged from an idealistic grassroots, Midwestern, youth community-centric, DIY scene. House shows and divey all-ages venues were the preeminent performance spaces and rock ‘n’ roll was once again king. There is an all-inclusive and carefree essence surrounding the band, as well as their audience, reminiscent of the wide-eyed drive and sense of purpose of an underdog sports team or - more appropriately, given their jumpsuits - a Formula 1 pit crew.
That cooperative vibe is most clear in their balanced attack, each of the six members bringing a signature part of the layered sound from song to song. “Hold On Tight” bashes down the door with a deceptively simple AC-to-the-DC riff, but the three-headed guitar monster attack of Dimitri Panoutsos, Chris Devlin and Max Loebman takes the standby arena rock formula to wild new places. In “Sunglasses” Loebman’s lead vocals evince an ethereally sunny pop disposition, which he later strips down to great effect, just his upper register and acoustic guitar, for the stark “Elementary Blues”. Throughout the album’s 12 tracks, the rhythm section of Joe Bordenaro on drums, Kevin Decker on bass, and Justin Bell on keys establishes a groove-meets-power foundation. On several songs, including “I Can’t Have You But I Want You,” Bordenaro sings lead as well, while the rest of the group piles on with a rowdy gang chorus.
The band of 20-somethings created their broad-yet-intimate sound not long after forming in 2017 from the remnants of under the radar local outfits Joe Bordenaro & the Late Bloomers, Yoko and the Oh Nos, and Max and the Mild Ones. The budding project soon became the subject of excited whispers around town. In 2018, the group released two singles on Bandcamp (“One Way Ticket” and “Let’s Get It Right”) and a 7" single (“I Can’t Have You But I Want You” and “The Move”) for nascent studio/imprint Treehouse Records These recordings raised the whispers to the level of folklore.

We'd like to thank our friends, partners, and families for their continued love and support in the making of this record. We'd also like to thank Anthony Esposito for his unmatched generosity, our Uncle TJ for keeping us in check, and our fantastic team for putting their energy and efforts into this band. To anyone that has listened to a song, attended a show, or encouraged us along the way; we do not take it for granted. - ROOKIE

Track Name: Hold On Tight
You’ve got to hold on tight
Everybody thinks you’ve gone crazy
You’ve got to slow down, chief
Before you go lazy lazy

You’ve got to keep it cool, kid
Karma never felt so good
You’ve got to start a new band
Rock it like a real boy would
Track Name: I Can't Have You But I Want You
A hot mess, but she won’t let you know it
She’s business all the time but I caught her walking by
She’s got that laser vision, her gun is her eye
You wonder if she looks at you, are you gonna die?

I can’t have you but I want you
All I want is to be free
And I can tell you think too highly of yourself
But man, she smelled so good

I can’t have you but I want you
All I want is to be free
And I can tell I got too high all by myself
Oo ya but man, it smelled so good
Track Name: Sunglasses
I like your sunglasses
She’s a renegade on rollerblades
I’ll write a hit for the masses
And I hope it doesn’t drive you away

She says, “It’s so tragic… that conversation’s become so passé”
And if it hurts, and it really does hurt
I’ll pack my bags and hop on a train
Track Name: Side of the Road
I was climbing through my window
I left my keys inside the ride I took home
Like I left my heart with a lady
Who sat with me out on the side of the road

We were thinking about leaving
Packing up without a place to go
She’d been dreamin’, had a vision
Let’s get the hell outside of Chicago

(Chewed Up) Well she chewed me up
(Spit Out) And she spit me out
(Beat Up) She beat me up
(Knocked Out) I was knocked out cold
(High Up) She got me high
(Low Down) She left me low
She’ll cheat you and she’ll leave you and you’ll end up alone
Track Name: Fake Grass
I find myself believing that I know a thing or two
But everybody’s leaving and now all I have is you
And I try to act like I have been around here for some time
But who am I deceiving? I have only but just moved

I sit alone for hours but I never feel alone
It’s then that I remember that I am so far from home
Why aren’t I picking up the phone?
And yet no one here is selfless but yet no one here is cruel
And everyone can sell it but we all know it’s not true

And I, I can’t be taken for a fool
Who knows me all too well

Yea he says he knows about you and he says he knows your name
And you act like you don’t know his but it’s only just a game
Because no one cares about you more than you could care for them
But since we all play guitar, well, we might as well be friends

Arguably the best-looking jerk on the block
This is my time, best of my time
Reservation makes a fool out of me
Every conversation is a building block and I’m learning
And I’m yearning to be the biggest fool I can be

So fine when you have the time
Working for the man and I’m in my prime, mama

If you’re dreaming of a lived-out past
And you’re thinking you could make it last
You ought to know
Someone’s got it bad like you
Someone’s got it out for you
Track Name: One Way Ticket
Feels like I’m running down a one way street
In the morning when I’m snoring
And I’m back to the beat on the hazy streets
That keep me from yawning

It starts right
No more shedding tears
Gotta lose all our fears
Better days are so near
Track Name: Michigan
If I were in Michigan man
I’d still hold my guitar in the palm of my hand
I’d have my own beach, I’d have my own land
I’d buy me a boat and I’d name it Roxanne

When I get hungry, I’ll go into town
Where every diner still thinks they’re the best around
When the weekend waitress takes my plate
I’ll have to sit around just until it gets late

‘Cause there’s a piano man who never looks at his hands
And if he saw me leave well, then, he might get sad but probably not

When I get hungry, I’ll go into town
Where every diner still thinks they’re the best around
When the weekend waitress takes my plate
I’ll have to sit around just until it gets late
Track Name: Miss United States
I’ve been to Hollywood with the palm tree streets
I’ve seen the Redwoods on my own two feet
You’ve got to live a little, learn, it’s all around you

She pulls a quick one, she’s going M.I.A.
But when you see her again, you’ll crawl back to the taste
Of her brandywine, you dig the vines between us

Did I try too hard? Did I play my cards?
Do I always end up feeling like a fool?
And I won’t

To call it my mind… It’s in a worn-out state
It’s such a fine line
For Miss United States
You’ve got to read the paper to see what they said about you
Track Name: E Jam
I can tell myself what I’m gonna do
But I’ll find another problem or another excuse
I can take one step and by the next one I’ll have done it again

Don’t you think that it’s funny
That we all got a job
Everyone to be here and now, can’t you see?
If you’re ever gonna understand
If it’s all some kind of master plan
Or what it’s gonna be like one day
If you see God face to face,
Just say you had no clue

Bandcamp Daily  your guide to the world of Bandcamp

Featuring Gary Bartz, 5 years of Rhythm Section Intl and an LP of the week by Nicolas Jaar